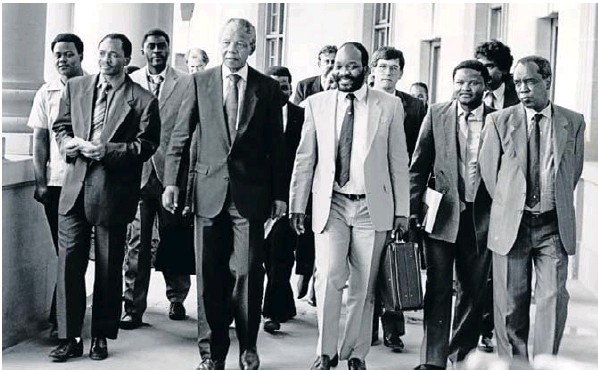 Nelson Mandela leads a delegation of the ANC at the Union Buildings in the 1990s . With him are Jacob Zuma (with Mandela’s briefcase), Saki Macozoma and Joe Nhlanhla. Jay Naidoo and Alec Erwin can be seen in the background

As a young boy fascinated by the seemingly endless strings of wagons, Saki Macozoma took pleasure from watching trains as they trundled their way along Port Elizabeth’s railway lines.

These days, a youthful, 61-year-old Macozoma still keeps a sharp eye on the railway tracks, only now with less fascination and a lot more pleasure.

This is because a significant number of the wagons hauled into the city each week are delivering thousands of tons of manganese ore from his Northern Cape mine to the Port Elizabeth Harbour.

From there, the currently wellpriced ore is shipped into China’s insatiable steel industry, along with others around the world.

Undoubtedly one of Nelson Mandela Bay’s most successful businessmen, Macozoma sat down with the Weekend Post this week.

A softly spoken, but measured Macozoma revealed snippets of a fast-paced, eclectic life. One which saw him rise from political imprisonment on Robben Island to a mining magnate currently poised for a stock exchange listing.

A true heavyweight, in both the political and business divisions, the Kwazakhele-born and educated father of three has been boxing clever since being imprisoned for five years alongside Nelson Mandela.

Following two years’ service as a member of South Africa’s first democratic parliament, the Unisaand Boston University-degreed man stepped into the world of big business when he was appointed managing director of the country’s largest parastatal, Transnet Limited, in 1996. 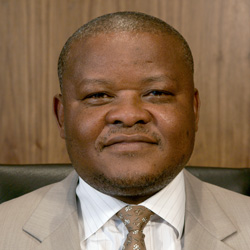 There was no discussion, however, on the irony of a Transnet head later becoming one of the rail and harbour authority’s biggest customers.

But Transnet was just the beginning for Macozoma, who went on to chair South African Airways and join the boards of a raft of companies and civil institutions.

While he has lived in Johannesburg for the past 23 years, he continues to retain strong ties to the Bay, where he maintains his Kwazakhele home and retains his memberships on the boards of both the Nelson Mandela Bay Business Chamber and Volkswagen Group South Africa.

His first real job, Macozoma revealed, was with a blasting and excavation firm specialising in roadworks. “It did not last long. I got fired. It seemed the security police did not want me near any explosives,” quipped Macozoma dryly.

Turning to the Tshipi é Ntle Manganese Mine in the Kalahari Manganese Field – of which, through his Main Street 774 and Ntsimbintle Mining entities, he is a majority shareholder, Macozoma sees a bright future – not just for the mine – but also for manganese.

“The mine, which is in the southern part of the field, has a life span of about 100 years, so it is going to be in business for a long time. In addition, there are two more mining deposits waiting to be developed in the north of the field.

“We intended opening these two mines. Part of the preparation for this will be a listing on the JSE.”

Nonchalant about his own success, expressing simply that he was happy, Macozoma livened up significantly when questioned around any advice he had for budding entrepreneurs.

“The youth, exposed to rap videos and Instagram-type media are being fooled into thinking that there is easy money out there.

“There is no easy money and hard work, the way to success, is not emphasised enough these days. I often still work 18-hour days. Patience, hard work, genuine commitment and taking full responsibility are the keys to success,” he said.

Macozoma also addressed an issue close to the hearts of Bay authorities, business and the public – the removal of the manganese ore dumps from the harbour in favour of the establishment of a long-mooted waterfront.

“There should never have been a manganese operation in the middle of the city. Transnet’s processes are slow, but the operation will be moved to the harbour at Coega in 2023.

“As it was, when the city was addressing casino licensing and the location of the region’s casino, I, in my capacity at Transnet at the time, had opened land in the harbour for such an operation. That however did not materialise, as the licence was awarded to the current casino operators. So, I certainly support the development of a waterfront in the harbour precinct.”

Ngoasheng and Macozoma acknowledged for their support of disadvantaged stud... 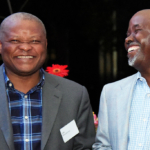 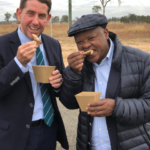