Tshipi Borwa, our new manganese mine in South Africa’s Northern Cape, has reached another milestone. The first train has arrived at the mine and is now being loaded with the mine’s first shipment of manganese destined for the Far East.

Moss Ngoasheng, chief executive of Safika Holdings, a Johannesburg-based private investment company, has announced it is part of an American and Australian consortium that has acquired Australian e-learner, Learning Seat, from Rupert Murdoch’s Newscorp.

Safika’s Australian arm, Winsaf, is a joint venture private equity firm between Australia’s Wingate Group and Safika. Winsaf partnered with global private equity firm, The Riverside Company, to acquire Learning Seat. Ngoasheng is a director of both Wingate and Winsaf.

“We are delighted with the acquisition of Australia’s premier e-learning institute; it is our intention to bring Learning Seat to South Africa and other African countries in due course,” said Ngoasheng. “There is potential for considerable growth in South Africa and elsewhere in Africa for e-learning. Learning Seat is in the forefront of the e-learning revolution that is taking place in education; the knowledge and expertise it brings can be very beneficial for Africa.

“We are very positive about the investment; Learning Seat is well-established in Australia and has a very strong management team all of whom will stay on and help us to grow and expand the business.”

“This is our first significant acquisition in partnership with Wingate, a very well respected company and is in line with Safika’s expansion strategy,” said Ngoasheng.  “We are focusing on businesses that are well-established and which have potential to expand within Africa and elsewhere.  Our two organisations work closely together and are actively pursuing other opportunities both in Australia and Africa.”

Justin Pitt, managing director of Safika Resources, said “We are very pleased with the progress of Tshipi to date and we are now stockpiling the manganese to be loaded on to the first train that will leave the mine for Port Elizabeth in November. From there it will be shipped to the Far East in December.” 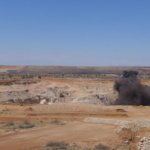 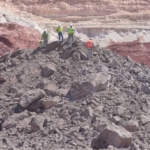 Safika’s non-executive chairman Saki Macozoma has been honoured by the
University of South Africa (UNISA) which has made him and former president Nelson
Mandela joint recipients of the university’s first Robben Island alumnus award. The
award, part of the Calabash awards that are UNISA’s highest honours, is to honour
those who were imprisoned by the apartheid regime because they fought against the
system of State oppression.

The board of Safika regrets to announce the sudden death of their long-time colleague Emily Soomane who died of a stroke on Friday. Emily, 48, had worked with Safika since 1999 first as a tea lady then as a receptionist and accounts clerk.

Moss Ngoasheng, Safika’s chief executive said everyone at Safika was deeply saddened by Emily’s death.  “She was a ray of sunshine around the office,” he said.  “Emily was always cheerful and always willing to help a colleague. We will all miss her.”

Many of Safika’s staff paid tribute to Emily praising her warmth and good humour.  Prabashni Naidoo who worked with Emily for ten years said:  “She was the kind of person you looked forward to seeing every day. She was a very balanced person and was always smiling.  She was always trying to better herself and always willing to learn.  She started her Safika career as a tea lady and became a receptionist and accounts clerk and a very important member of the team.”

Emily’s colleague Flora Phiri worked side-by-side with her at Safika’s head office and said their work relationship had deepened into true friendship.  “I will always remember her for her humanity and her cheerful and caring nature,” said Flora.  “If someone was in trouble Emily would always be there for them.”

Connie Naude who worked with her since Emily joined the company said:  “She was the kind of person who would compliment you on your clothes even if you had worn the same garment many times before.  She always had a smile and kind word for everyone. She was always willing to go the extra mile in her work and equally willing to help others when they needed it.  I will MISS her something terrible.”

Nomadlozi Mlotywa, an accounts assistant said: “Truly Safika has lost an icon.   I met Emily in February and established a relationship with her as a friend, mother, advisor and colleague. With a smile she humbled herself to everyone young or old and will be missed by everyone. She was an angel.”

Executive secretary Singathwa Elise said:  “I fondly called her Sis Em. Forever sweet. People who called the office often told me that just the sound of her voice made them feel better after a ‘bad’ day.”

Emily is survived by her husband Steven, daughters, Musa, 30 and Lerato, 22, her  son Karabo 15, and grandchild, Amahle, six.

JOHANNESBURG (miningweekly.com) – Transnet is compiling the first-ever distributed power train for manganese, made up of 208 wagons.

The train will be loaded at the newly completed rail siding of black-controlled emerging manganese miner Tshipi é Ntle’s new project, near Kathu, in the Northern Cape.

Transnet Freight Rail has opted to compile the train to increase the volumes of manganese exports from Port Elizabeth and ultimately Coega.

“That train will be compiled at our railway siding,” said Behnken.

The distributed power train makes use of the same technology that Transnet deploys down the iron-ore railway line from Sishen to Saldanha, on which 342-wagon trains travel.

Typically, the trains on the manganese general freight line to Port Elizabeth have been shorter, predominantly consisting of 104 wagons.

Transnet is poised to do the once-off trial run with a train made up of two 104-wagon sets with locomotives at the front and rear.

The locomotives communicate by radio signal with one drive-control unit managing the power.

Although the long train will be loaded with ore, it will not be Tshipi’s ore, the first of which is only scheduled to be available from the company’s Tshipi Borwa openpit project towards the end of 2012.

Tshipi é Ntle Manganese Mining (PTY) Ltd., a company in which Safika has a major stake has won a conservation award for its work in protecting endangered secretarybirds.  Tshipi is creating a new manganese mine in a remote corner of the Northern Cape.

“The award is given by the Northern Cape Raptor Conservation Forum to an organisation or person who has made an outstanding contribution to raptor conservation in the Northern Cape, said Beryl Wilson, a zoologist at the McGregor Museum in Kimberley, who is working on the project.  “The award salutes the commitment to the environment shown by Tshipi é Ntle Manganese Mining. The work Tshipi has done sets a fine example to other mining companies, particularly because Tshipi demonstrated its commitment even before it began production.  Tshipi’s work has paved the way for us to learn why secretary birds are in trouble.”

Sagittarius serpentarius, as scientists like to call the secretarybird, is one of South Africa’s most iconic creatures; a secretarybird is even featured on the country’s coat of arms. Secretarybirds were once a common sight stalking through the South African bush but their numbers are plummeting and this year has been listed as “near threatened” in South Africa and “globally vulnerable by the International Red Data List of Threatened Species.

Tshipi é Ntle is chaired by Safika’s chairman Saki Macozoma, Safika’s chief executive Moss Ngoasheng is a director of Tshipi. Former South African Brian Gilbertson’s Jupiter Mining is also a major shareholder.  Macozoma said:  “When I was told of the plight of the secretarybirds I immediately said this was a project we should support.  The project has been a great success and is providing South African scientists with valuable information that will help us protect these vulnerable creatures.  We are proud to be working with dedicated scientists and honoured that we have won this award.”

Nontokazi Mabuza, Tshipi’s health, safety, environment and community liaison officer, who accepted the award at a function in Kimberley on Monday (March 19) said:  “From the very beginning Tshipi é Ntle was determined to be an environmentally responsible organisation.  We started the secretarybird project at the same time we started construction on our new Tshipi Borwa mine near Hotazel in the Northern Cape.  Our commitment is to create a profitable mine that will provide employment and economic benefits for the people of the Northern Cape for generations to come, to ensure that we help the human communities where the mine is situated and to help protect the environment whenever we can.”